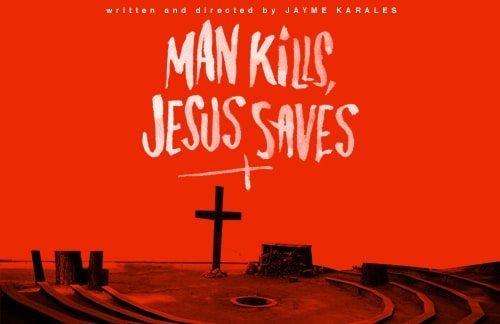 Slasher Studios and UnHollywood Films are teaming up this August for Man Kills, Jesus Saves. Slasher Studios is primarily known for their award winning horror film Don’t Go to the Reunion and the upcoming holiday themed slasher Dismembering Christmas, written by Kevin Sommerfield and Steve Goltz and directed by Austin Bosley. UnHollywood Films is best known for the upcoming Michael Malkiewicz-starring vehicle Practice Makes Perfect and the limited-run comic book series The Extractor, written by Jayme Karales and illustrated by Joel Amat Güell.

Plot synopsis:
Set in 1988 West Virginia, Man Kills, Jesus Saves centers around a Bible Studies camp for children led by the ever ‘hip’ youth pastor Duane Sheppard Jr. As he and his collective of Christ-loving youth counselors begin setting up camp for the season, a series of strange happenings occur that rattle the members of the site and, in turn, lead to several murders committed by an unidentified killer.

A Kickstarter campaign to raise funds for the production is set to begin in June of this year, and will offer perks like: a walk-on role in the film, signed merchandise such as DVDs and props, and writing advice from more than three different screenwriters.