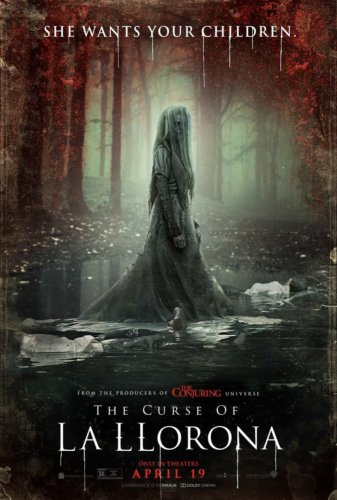 A recently widowed social worker, Anna, is investigating a case where the mother of two young boys is exhibit disturbing behavior by locking them in a closet insisting she’s protecting them from La Llorona. La Llorona is a legend of woman in white who drowned her kids in the river after her husband left her for someone else, and then killing herself. Now she seeks out new children to replace them, and if you hear her cries she targets you. Now Anna discovers her own children have been targeted and must do whatever she can to protect them.

The newest entry in the Conjuring universe ranks with the original Annabelle and The Nun as one of the weakest films in the franchise. We are given a very interesting story with a creepy legend and villain. Unfortunately there is very little substance to either of these things. While we do love seeing Anna fighting for her kids, as a horror movie, it’s very lame. The film and its villain are relegated to nothing but the same jump scares over and over, and La Llorona is relegated to nothing but lunging and screaming. This could have been so much better if it eased back on the jump scares and relied more on building suspense, intensity, and a creepy atmosphere. While The Nun was also a weak film, it at least built itself around trying to appear creepy and atmospheric. It also needed a lot more depth and emotional pull with the family that it barely scratched the surface with. Aside from the scares, we also are subjected to extremely cringeworthy humor from the spiritualist who helps the family. It also features one of the most frustrating and dumb character decisions I’ve seen in a horror film in a while, and I don’t care that it was a child, especially when said child knew they weren’t supposed to do this act but they did it anyway. All this said, the film’s biggest strength rides on Linda Cardellini as Anna. She seriously carries this movie on her back by emitting a good amount of emotion in her performance. She expresses the grief she feels of losing her husband, being a single mom, and now having to worry for her children’s lives and the fear of what’s now haunting them.

Overall, this movie was a huge missed opportunity in how they chose to approach this film but making it nothing but a jump scare film. And it’s unfortunate because Linda Cardellini puts so much effort into the role that the writers and producers should have put into the script and film, especially with a good story at hand.