“I’m always the one who gets killed. And I want it to be really gory. Body parts all over the place. Mangled!”

“Horror films are where women can shine and have a chance to lead. They always save the day in these films.” 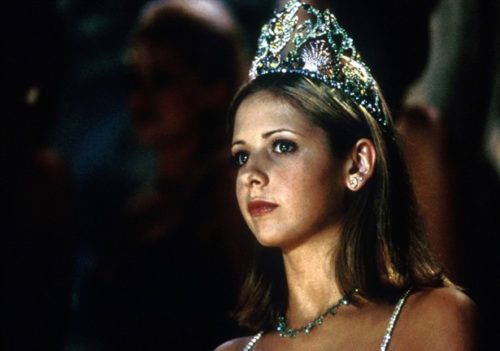 I KNOW WHAT YOU DID LAST SUMMER

Sarah Michelle Gellar was born on April 14, 1977 in New York City. Her career in horror movies began in October 17, 1997 when the hit slasher film I Know What You Did Last Summer hit theaters. The film grossed a worldwide total of $125,586,134. Sarah played the role of Helen Shivers. A beautiful girl who plans on moving to New York to become a serious actress. That night her and her friends get into a car accident. Hitting a man who is standing in the middle of the road on the 4th of July. She agrees to dump the body into the sea. At first, she disagrees of dumping the remains, but later agrees because she is afraid of losing her trip to New York. One year after the incident, Helen’s trip to New York failed, thus she had no choice but to work for her sister’s department store. The friends begin to receive threats and start to wonder if the man they left for dead wasn’t really dead after all. Sarah gets some great scenes in the movie. While she is sleeping, the killer cuts Helen’s hair off and leaves the threat “SOON” on her mirror. This is where we hear that Sarah has a killer scream. Even after being threatened, she still participates in the Croaker Parade, where she sees the killer threatening her with his hook. At the pageant, while a contestant is singing, she sees the killer attack and murder her boyfriend Barry. She screams and tries to get help, but no one believes her. Later she is escorted by a policeman. Then the fisherman lures the policeman in an alley and kills him. This is when one the best chase scenes I have ever seen in a movie happens. Helen then escapes and runs to where her sister is working. Not long after her sister is killed. Leaving Helen alone with the killer inside the store where Sarah brilliantly walks around with the most terrified look on her face. This girl can really play scared. Sarah is attacked and continues to run through the store. She jumps out of a window from the second story and runs toward the parade. Just as we think Helen is going to survive. Which we are all rooting for. She makes the dumbest horror cliche move of turning around after hearing a noise coming from behind her. She turns back around and the killer is in front of her pushing her into a pile of tires. She continues to fight but is stabbed to death by his hook. No one could hear her screams because of the parade. I find it rare to root for characters to live in horror movies, but Sarah manages to play such a likable character that you want her to survive. 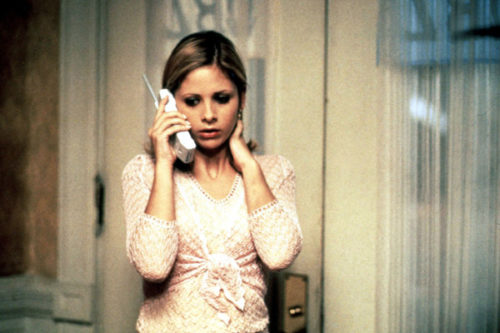 “Movies are not responsible for our actions.”

After her amazing performance in I Know What You Did Last Summer she snagged the role of CiCi Cooper in Scream 2. Another successful slasher film. Making a Worldwide total of$172,363,301. Which opened the same year on December 12, 1997. Sarah once again gives a strong performance. Casey “Cici” Cooper is a film student at Windsor College who is murdered by Ghostface in Scream 2 as part of copying the Woodsboro murders from the first film. Sarah gets in my opinion one of the best scenes of the film. She is talking on the phone with her friend when Ghostface calls her. Her other sorority sisters are out partying leaving CiCi all alone. Ghostface stalks CiCi and eventually attacks her. Leaving Sarah to have another brilliant chase scene in a horror movie. She runs up the stairs instead of running out the front door and continues to run until she is in the attic. Ghostface grabs her and throws her through the window and then stabs her in the back before throwing her off of the balcony. Sarah gives out another great scream as she falls to her death. Sarah is only in two scenes and in the background of another but she manages to make such an impression on the film by once again playing a likable character that you can actually root for to live. 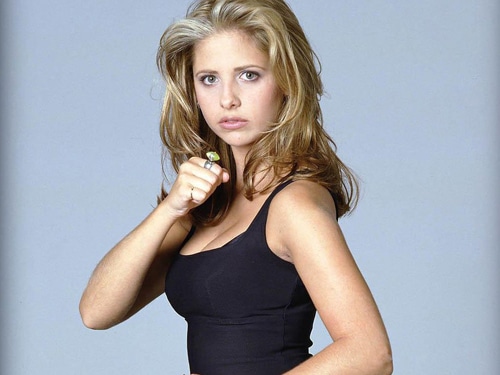 “It’s my first day! I was afraid that I was gonna be behind in all my classes, that I wouldn’t make any friends, that I would have last month’s hair. I didn’t think there’d be vampires on campus.”

Sarah isn’t just known for her horror films. She is also a scream queen of televison. Playing the role of Buffy Summers. A bubbly teenager who finds out that she is the Chosen One to protect the world from demons, vampires and whatever else could be thrown at the world. On March 10, 1997 a pilot for Buffy the Vampire slayer premiered on the WB. With the ratings of 3.4. It received largely positive reviews from critics. The show was sure to be a hit for the WB. A hit it was. Running for 7 seasons. Ending May 20, 2003. Sarah’s role of Buffy was inspiring and strong. It was fun to watch a girl kick so much ass.

“The whole time I was in that house. I felt something was wrong…”

Sarah is also known highly for her work in The Grudge. A remake of a Japanese horror film. The film hit theaters October 22, 2004. The film grossed worldwide $187,281,115. Sarah stars as Karen Davis. An American social worker who moves with her boyfriend to Tokyo. After the first caretaker Yoko does not show up at work she volunteers to take care of Emma Williams. An elderly woman who is living in the house that is cursed which causes her to fall victim. When the curse starts claiming the people around her she starts investigating the origin of the curse. She decides to head back to the house to keep her boyfriend Doug from falling to the grudge, but fails. Karen then tries to stop the curse by burning down the house, but this instead releases the curse. She is the only survivor. Sarah returns for the Grudge 2 but is killed off in the opening which left fans devastated and disappointed.

Sarah has had a successful and tremendous career in horror and I hope it continues on. She will always be one of my favorite Scream Queens.