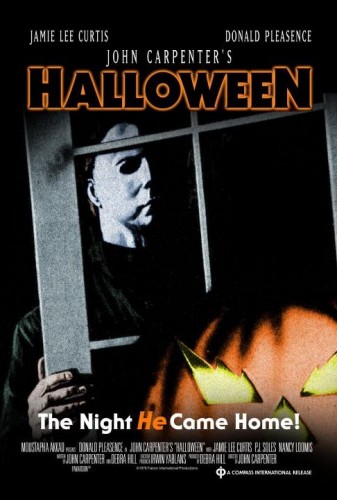 Itâ€™s Halloween, and your (less-than-stellar) plans are laid out for the day. Youâ€™ll be babysitting, making popcorn, and watching campy horror flicks. But something feels offâ€¦ somebodyâ€™s watching you. Or are they? John Carpenterâ€™s classic thriller â€œHalloweenâ€ is widely regarded as one of the best horror films ever made, and is one of the few horror classics to transcend its genre (much like â€œPsycho,â€ â€œThe Exorcist,â€ and â€œJawsâ€) and become known as not a horror classic, but a true classic of cinema. With its simple-but-terrifying story of three babysitters who are stalked by a psychotic killer, it garnered rave reviews from critics, including notorious anti-slashers Roger Ebert and Gene Siskel.

Fifteen years ago, six-year-old Michael (who interestingly, is never referred to by name after the opening scene) crept into his sisterâ€™s bedroom on Halloween night and brutally slaughtered her. To the teenagers of Haddonfield, this is little more than the story behind the token â€œhaunted house.â€ Unfortunately for three teenage girls, that little boy is now grown upâ€¦ and after escaping from Smithâ€™s Grove Sanitariumâ€¦ heâ€™s coming home.

Shy bookworm Laurie (Jamie Lee Curtis, in her star-making film debut) has a boring night ahead of her- or so she thinks. As the day progresses, she finds herself increasingly paranoid that she is being followed. Her friends Annie (Nancy Loomis) and Lynda (a *totally* wacky P.J. Soles) pay her suspicions no mind, as they prepare for a night of drinking and sexâ€¦ but they too are being watched. As the night continues, Laurie and her young charges Tommy (Brian Andrews) and Lindsey (Kyle Richards) watch horror movies, carve jack-o-lanterns, and make popcornâ€¦ and Laurie has all-but-forgotten her suspicionsâ€¦ but her stalker has not forgotten about her. Soon, a suspicious phone call prompts her to check on Annie and Lyndaâ€¦ and the real terror begins. While Laurie and her friends face the murderous stalker, Michaelâ€™s psychiatrist (Donald Pleasence) tries to convince skeptical police that the town is in mortal danger.

This seemingly-vague description actually gives more or less the entire plot, but no matter. Halloween is a style-driven movie. It has about enough plot to fill a thimble, but it doesnâ€™t need any more than it has. Director John Carpenter and cinematographer Dean Cundey compensate for this with a very polished, but moody, style. Long, wide tracking shots and eerie blue lighting fill the film. The score is as simple as the script, but simplicity seems to be this filmâ€™s strong suit, and the score is no exception. Itâ€™s minimal and repetitive, but is amazingly effective. Whatâ€™s interesting with Halloween is that, for the most part, it is rooted in reality. This is a story of real girls being stalked by a real killer. Only in the filmâ€™s final moments does it suggest the possibility of the supernatural. Everything happens as it would in a real-life scenario. The killer does not know his victims, and they do not know him. He happens to fixate on the first girl he sees, the unfortunate Laurie, who inadvertently introduces him to more prey. Itâ€™s obvious, though, that Laurie is the one he wants. Despite some extensive toying with Annie, and a fair bit with Lynda, the cat-and-mouse game between Laurie and Michael is apparent from the first act of the film. He fixates on her from the very beginning, and saves his most horrifying tricks for her.

Another interesting thingâ€¦ Michael is much more interested with toying with his victims than he is actually killing them. He plays games with Annie, trapping her in a small laundry house, locking her car door, making noises outsideâ€¦ he teases Lynda, masquerading as her boyfriend covered by a sheet. He actually allows Laurie to see him, though. Little glimpses throughout the dayâ€¦ and by the filmâ€™s second act, sheâ€™s constantly seeing himâ€¦ and I am convinced that at least two of these instances are in her head, from her increasing paranoia. Why is he after her? No reason. Sheâ€™s just *there*. The sequels will offer another (contrived, lousy) explanation, but that was never the case in this film. She just happened to walk up to the Myers house and catch his eye.

Now, despite the all-around excellent filmmaking and scoring, the two lead performances (by Jamie Lee Curtis and Donald Pleasence) easily put the rest to shame. Curtis is believable and sympathetic as the innocent, naÃ¯ve teenager, and her calm, stunned final line (â€œIt WAS the boogeyman.â€) still gives me goosebumps. Pleasence is slightly campy, but just enough to sell the characterâ€™s obsession with his murderous patient. Nancy Loomis and P.J. Soles are adequate as Annie and Lynda, but they lack the honesty and emotion that Curtis and Pleasence bring to the film. As the silent, slow-but-steady Michael (known in the script as â€œThe Shapeâ€), Nick Castle is calm, eerie, and moves with a fluidity that none of the sequels have ever managed to capture.

While Black Christmas may have done the â€œyoung people stalked by a killerâ€ concept first, Halloween takes it into a different direction. Itâ€™s not really a slasher film. Itâ€™s very much a one-on-one stalker movie until the final third of the film. These girls just happened to catch the psychotic killerâ€™s eyeâ€¦ and now he is fixed on them. And while directly inspired by Hitchcockâ€™s classic â€œPsycho,â€ Halloween inspired scores of slasher films itself, starting with the more straight-forward â€œFriday the 13thâ€ (a legend in its own right).

All-in-all, this is a simplistic, but very effective, psychological thriller. Itâ€™s not a true slasher film, which is why I think it stands out. I must agree with Ebert, though. It is my favorite film of all time, and is one of the best films ever made.